Facebook is preparing to launch officially licensed music videos on its social network in the U.S. next month, in a direct challenge to YouTube. In materials reviewed by TechCrunch, Facebook informed Page owners linked to artists they’ll need to toggle on a new setting to add their music videos to their page ahead of an August 1st deadline, at which point Facebook will automatically create a page of their videos if no action had been taken.

Artists will not have to manually upload their videos or even provide links, Facebook told the artist Page admins. Instead, by enabling the new setting, artists are giving Facebook permission to add music videos to their Page, where they can be discovered by fans on the Page’s Videos tab. This library will include both the artist’s own official videos and those they’re featured in, Facebook explained in its marketing materials.

Once enabled, the artists can edit or remove their videos from this destination at any time.

Though artists are being strongly encouraged to enable the feature by August 1st, if they choose not to or miss the deadline, Facebook will create a separate official music Page on their behalf titled “[Artist Name] Official Music.” This Page will be created and controlled by Facebook and will be accessible by fans via the Facebook Watch tab and a new music video destination on the platform.

In an email sent to Page owners (see below), Facebook explained that whenever it receives a new release from a music label, the artist’s Facebook Page would automatically share the video directly on the page’s Timeline. This allows the new video to reach all the followers’ News Feeds. The setting for automatic sharing can be turned off at any time.

A partial screenshot of the email to artists leaked to Twitter, where it was amplified by social media consultant Matt Navarra. The addition had previously been reported by other smaller sites, as well. TechCrunch has reviewed the marketing materials that explained in more detail how to enable the setting on artists’ Facebook Page… 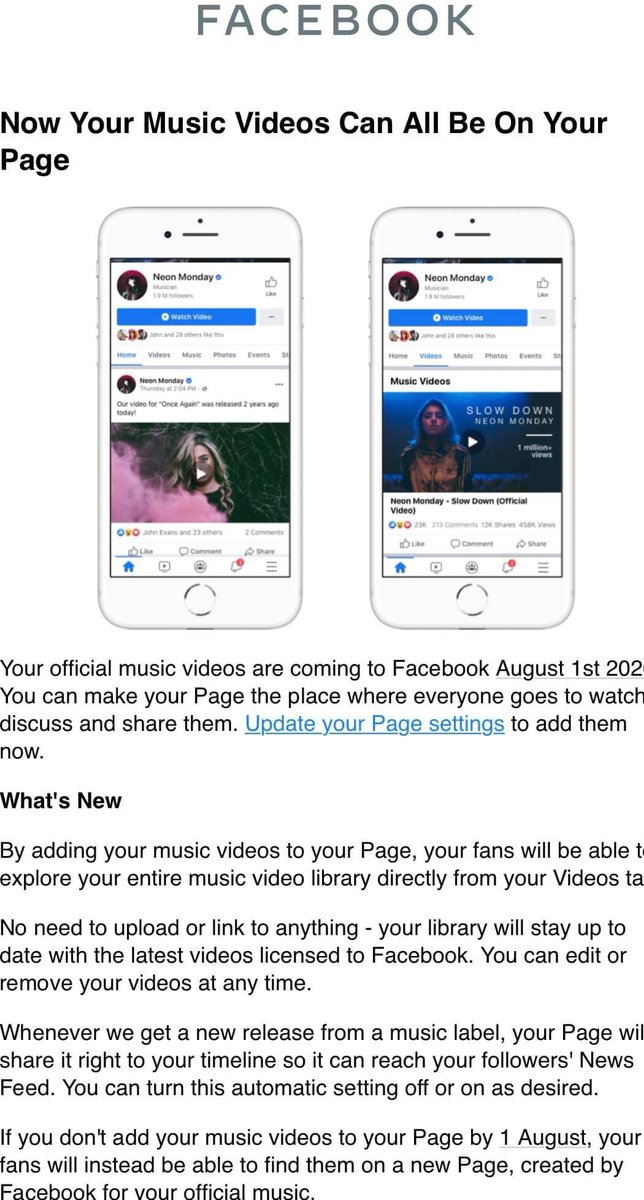 By enabling the setting, artists are also giving Facebook permission to share aggregate performance insights with righstholders, including likes, shares, comments, views and other engagement data associated with these auto-generated posts, the materials noted.

In addition, artists can edit the auto-generated posts, including their title, description, tags and even the thumbnails…Read more>>